What Is an "Ex Voto" Image?

In times of illness, misfortune, or uncertainty Faith inspires us to turn toward Heaven in prayer for help. We often address our prayers to the Blessed Virgin Mary and to the Saints for whom we have a particular affection in hopes that God would grant us our request through their pious intercession. When our prayer has been answered, then we owe a debt of thanksgiving for this favor which has been granted to us through the mercy of our loving God.

For over 500 years people have expressed thanksgiving by making images which have become known by the name ex voto (from the Latin "In fulfillment of a vow"). 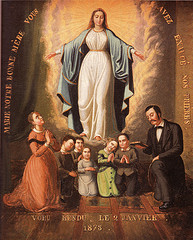 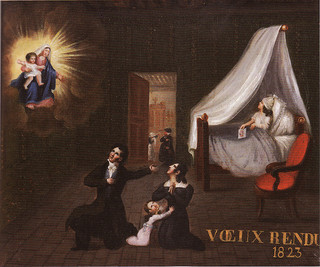 Ex Voto images are devotional paintings or commemorative plaques which are gratefully made as visible memorials of a particular blessing which has been received in answer to a prayer. They are sometimes illustrative depictions which relate something of the story in which heavenly intervention is manifested. These images are beautiful snapshots of God's grace in action. Often a short narrative description of the miraculous event accompanies the image. Other times the Ex Voto is a plaque which simply says "Thank You" as a public, yet discreet act of thanksgiving.

Beginning in 15th century Italy, this tradition has continued throughout the centuries and has spread to shrines and sites of pilgrimage throughout the world. Anyone who has visited the Chapel of the Miraculous Medal in Paris, or the Shrine of Our Lady of Altotting in Bavaria, or the Sanctuary of the Infant Jesus in Cebu, Philippines, has seen hundreds of Ex Voto images or plaques which adorn the walls of the church. These personalized expressions of thanks for graces received move us to profound admiration of the goodness of God and to greater confidence in God for our own necessities.

This Tradition Continues in the Digital Age!

This Ex Voto tradition is being incorporated into a digital wall on this website in order to make known the divine power and mercy of the Infant Jesus and to inspire the faithful to a greater spirit of prayer and devotion.